If you're looking for fast, versatile network storage at a reasonable price, Broadberry's CyberStore 212WSS-NVME will be right up your street. This all-Supermicro 2U rack server will take up to four PCle NVMe SSDs, along with eight hot-swap SAS or SATA drives - and to keep things running smoothly, it's powered by dual ten-core Xeon Scalable Silver 4210 CPUs, along with a generous 96GB of 2,933MHz DDR4 memory.

Notably, the server also comes with Windows Storage Server 2019 pre installed. This OEM - only edition of the OS is functionally identical to the standard Windows Server 2019, but is licensed to function only as a storage server and not as an application server. This doesn't mean you can't host apps such as Microsoft Exchange, but in order to do so you'll need to purchase additional client access licences (CALs).

As for capacity, there's plenty of flexibility on offer. The price we've shown includes two data centre-class 1.6TB Intel P4610 NVMe SSDs, which come cabled directly to two embedded ports on the motherboard: if you want two more, Broadberry will install a dual-port PCIe controller card free of charge. The OS meanwhile is installed on a separate pair of mirrored S4S10 SSDs, tucked away in dedicated bays alongside the dual 1.2kW hotplug power supplies at the rear.

This leaves all eight hot -swap LFF bays available for mass storage. These all come fitted with hot-swap carriers, all support both SAS and SATA drives - and you're free to install whatever drives you like without invalidating the warranty, something many other storage vendors won't permit.

Even better, if you deploy the CyberStore and then later find that your needs have grown beyond the capacity of its chassis, an SAS3 port at the rear lets you attach additional external disk shelves. The supplied Broadcom SAS host bus adapter (which manages all non-NVMe storage) can support a whopping 1,024 drives, and the server itself has no restriction on capacity so you can expand to your heart's content. 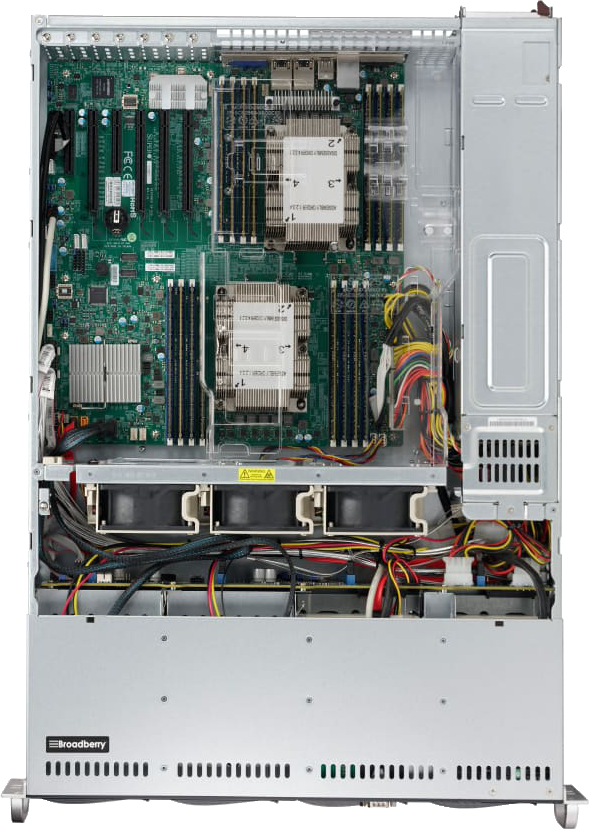 For testing, we installed four 12TB Western Digital SAS3 hard disks in the CyberStore's main bays, and used Windows' Storage Spaces feature to combine them with the two NVMe SSDs into a single virtual disk. Not only does this keep things simple, it allowed us to enable the tiering option, which automatically moves hot data onto the SSD to ensure the fastest possible access times. In the process, you can also choose between striped and mirrored drives. and decide just how large the SSD and hard disk tiers should be.

Local performance for our mirrored, tiered virtual disk was impressive, with lometer reporting raw sequential read and write rates of 42.9Gbits/sec and 15.4Gbits/sec respectively. The random write test normally sees performance plummet whenever mechanical drives are involved, but with the SSD tier in place, our random-access writes were barely any slower than sequential ones at an average of 14.1 Gbits/sec Throughput rates are equally strong. With lometer set to 4KB block sizes, we saw sequential read and write rates of 391,500 and 317 ,300 lOPS, while random operations completed at 312,500 and 132,800 lOPS, For all tests, we recorded lightning-fast latencies between 0.2ms and 0.6ms, thanks again to those front -facing SSDs.

Provisioning NAS shares is easy too, and since the CyberStore boasts a pair of lOGbE ports you can expect blazing network performance. We used a Dell T640 tower server to connect to a share on our tiered virtual disk and saw read and write speeds in lometer of 9.2Gbits/sec in each direction. It was the same story with IP SANs, where we saw a 500GB target deliver identical read and write speeds.

In all, there's not much more you could demand from a storage server. The CyberStore 212WSS-NVME gives you the freedom to install whatever combination of disks best suits your needs, and Windows Storage Server 2019 makes it easy to set up tiered virtual drives for maximum performance. There are cheaper storage options, but if performance is a priority, this is a superb choice.